What follows is not your typical, "hey guys, look at my awesome painting skills" post about building and painting minis.

Rather, what you will see below is what happens when a Kingdom Death Monster mini gets basically destroyed and a guy rebuilds it from scrap resin and green stuff.

I have not so far used this blog for posts about minis and game stuff and I do not plan to change or complicate the focus in the future, but I wanted to share some shots of a project I've been working on lately and this seemed like a logical/easy place to do so.

(Which is to say that painting, building and other such topics will not be regular subject matter on this blog.)

The backstory is simple: after I built and primed my Butcher mini, I pressed him immediately into service and played a few showdowns with him (including the infamous showdown where he killed everyone in Zeus Lenox).

I started painting him one day--I had a sort of metallic blue/orange kind of final product in mind-- and, one night, while he was in transit between my office and the kitchen table, I dropped him.

When he hit the floor, he basically exploded.

The following occurred:
And that is why I had to reconstruct my Butcher mini.

First things first, I realized that I wasn't totally feeling my original paint scheme and that if I was going to rebuild himsoaked the mini overnight in paint thinner. The next day, I scrubbed the primer off with a toothbrush.

(This took...several attempts. Some scraping with a tweezers was involved.)

Next, once I got the mini back down to resin, I cut a triangular piece of resin from an old sprue and super glued it to his helmet. From there, I green-stuffed it out (with Citadel liquid Green Stuff, which is a little easier to sculpt when you're doing very fine work, I find).

I also built fangs for the jaw piece out of liquid Green Stuff.

Ultimately, my goal was to paint the helmet in bone/stone tones (to give them a more...raw/natural/found/crude/primal sort of appearance), so I chiseled some grain details into the helmet visor with a small hand drill, a tweezers and an X-Acto knife
To replace the spike/knife that broke off the top of his helmet, I cannibalized one of the bone knife Survivor weapons (from the Rawhide set). Essentially, I chopped the knife off, cut off its handle and glued it where the old spike had been.

Next, I (quite stupidly, it turns out) tried to glue his surviving hatchet back on. I also cut the Butcher hatchet from the Rare Weapons/Screaming Antelope sprue and tried to glue that back on as well.

I tried gel and I tried regular super glue and I even (more stupidly) tried the kind of heavy epoxy where you have to mix the two elements together and let it set over night.

Ultimately, the old cliche about a thing breaking and never being as strong as it was held, however, and my "drown it in glue" methodology ended in failure.

From there, having basically ruined the mini's hands, I figured I had nothing to lose, so I drilled out the hatchets and the (mangled remains) of the hands and glued pieces of thicker sewing needles into the stumps of the hands, forming supportive stubs.

I slid the hatchets onto the metal stubs and glued everything together with regular super glue. I wouldn't say this resulted in great success, but it was sturdy enough to proceed.

From there, I re-primed the model.

Here is how the Greenstuffed bits looked with white primer: 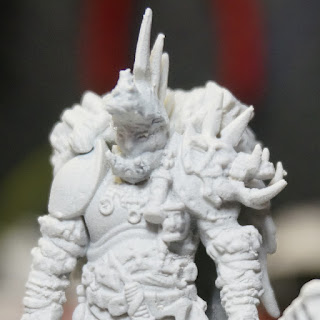 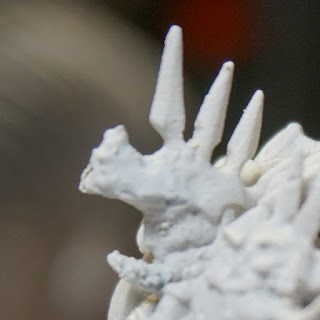 I mean, none of it looks especially great, but in terms of a tabletop-quality mini that you're looking at with your naked eye (from a few feet away), I think the head is very serviceable: 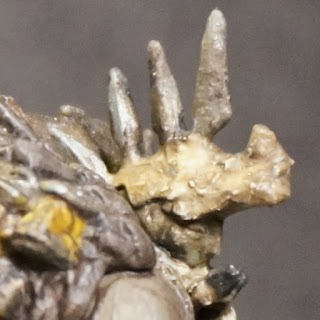 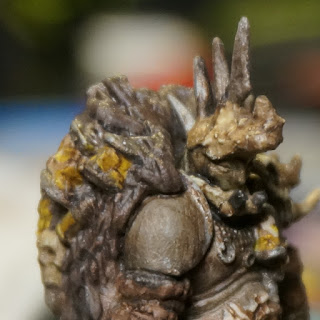 The hands, however, did not go as well.

This is, as I have been saying, mostly my fault: trying to reaffix the hatchets without some kind of support was stupid, and I basically ruined the figurine's hands beyond repair.

I tried to cover up for this with paint, and had not-great results: 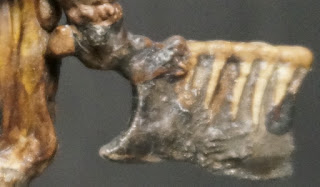 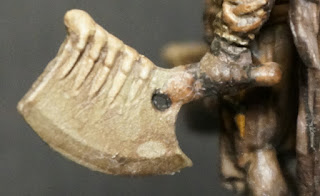 Here is the final outcome from two angles: 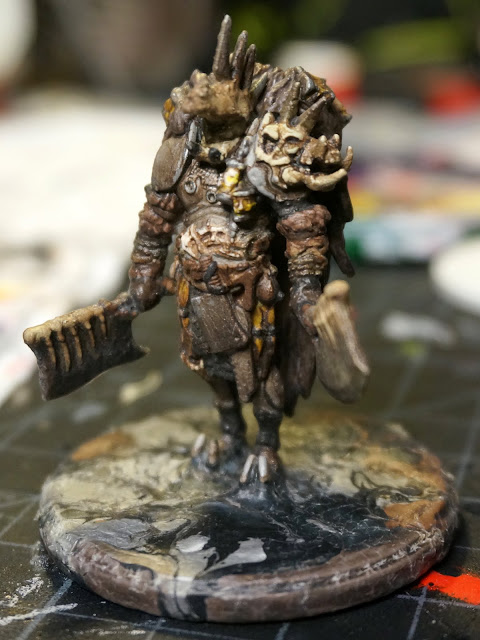 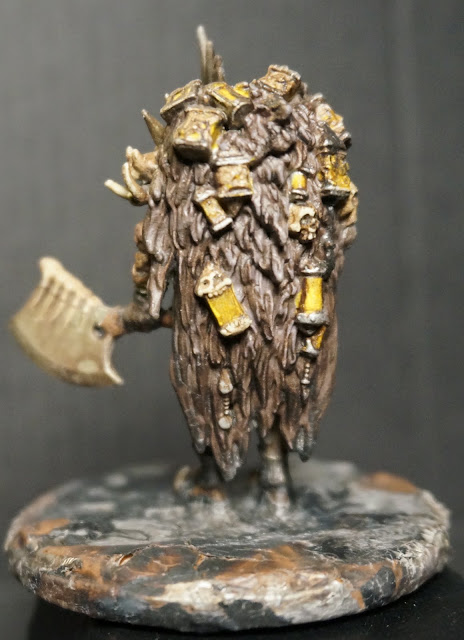 Email ThisBlogThis!Share to TwitterShare to FacebookShare to Pinterest
Labels: Hobby