Good news, everyone: all of the new features that I want to include in the Anniversary Release are complete and, as far as I can tell right now, ready to ship.

From here, I need to take care of two things before I roll out the new release.

First, I want to spend some time looking at presentation, i.e. to make sure that all of the adjusted sheets and controls and what-not look alright.

Second, as I mentioned in a previous blog post, I need to spend some time making sure that old date migrates to the new version of the Manager correctly.

The first thing should only take a couple/few hours, but the migration QA could take longer, especially if I find any major issues.

tl;dr I am still on track to ship the Anniversary Release of the Manager this weekend.

In the meantime, please enjoy this animated GIF feature demo that shows off the new player management controls at tablet resolution!

And thanks for using the Manager!
Posted by Timothy O'Connell at 6:26 PM 1 comment:

The Anniversary Update is delayed


I got a couple of emails about the Anniversary Update, so I figured I should check in and say a few things about why the update hasn't gone out yet and how progress is going generally.

The tl;dr is that the update is late because I'm not done with it yet, but I am still working hard on getting it ready.

Hit the jump for complete details, including some teaser screen captures and a little info on the top-secret V2 project.

Read more »
Posted by Timothy O'Connell at 5:55 PM No comments:

As promised, I took a little time today to record another animated GIF demo showing off the general feature set and workflow for the Enhanced Timeline.

The Enhanced Timeline will ship with the Anniversary Release (i.e. later this week) and, in addition to being accessible from all views (e.g. Campaign Summary, Settlement Sheet, Survivor Sheet, etc.) it will integrate the old Settlement Event log.

At any rate, check out this mobile resolution demo to get a general sense of how the workflow will look.

The Anniversary Release still still on track to be completed on or around Wednesday, but presently, I'm thinking I might take an extra day with it to make sure I feel good about how legacy user data will migrate, etc. before I roll it out.

More on that as I have it.

Posted by Timothy O'Connell at 3:12 PM No comments:

Over the last few months, I have received a bunch of requests to a.) make Settlement Sheet settlement notes not require page reloads and b.) to come up with some kind of solution for sharing notes/announcements/alerts among all players on a campaign.

The solution, which will be included in the Anniversary Release (later this week), is the Campaign Notes feature:

This is just one of a handful of major new features that are going to ship in a couple/few days when I've got this Anniversary Release QA'd and ready for production.

The other big feature in the release is the new Timeline controls (which I teased yesterday). At present, the plan is to do an animated gif demo for those tomorrow and then work on shipping the Anniversary Release on Tuesday or Wednesday.

Stay tuned! And thanks for using the Manager!
Posted by Timothy O'Connell at 1:07 PM No comments:

It's been quiet for a while, so I just wanted to check in with a quick update to announce that the Anniversary Release of the Manager is nearly ready to roll.

As far as when it will be ready to ship, I'm thinking it will still probably be a couple/few days before I feel ready to push it into Production: there's a tone of upheaval in this one, in terms of both front- and back-end elements, and I really want to make sure I feel good about it before I release it into the wild.

In the meantime, here are a few sneak peaks of how things currently look at mobile resolution: 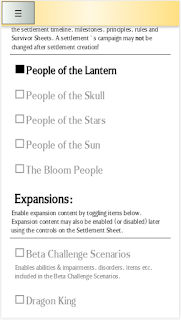 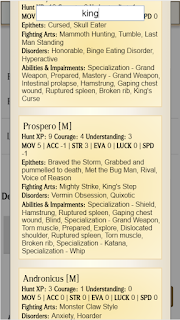 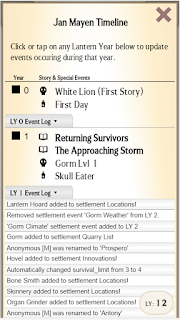 1.52.1251  isn't as focused on break/fix as I thought it would be: turns out that I didn't ruin the whole webapp with the big Spidicules push like I thought I might have.

In terms of corrections and fixes, there are a few--including a change of the "Pictograph" text to use the errata text from the FAQ--but most of them are pretty low-stakes and presentation-oriented.

I spent a good amount of time in this release cleaning up some known presentation issues and trying to keep the overall aesthetic moving in the direction of looking consistent with the general KD design elements in the core rules, etc.

There is one major new feature in 1.52.1251, however. Survivor Search has been added to the Campaign Summary view.

The big idea behind Survivor Search is that it helps you rapidly search through large populations of survivors for a particular Fighting Art, Disorder, Epithet, A&I or note on the Survivor's Sheet. Give it a shot! (Tip of the hat to /u/jeeshburger.)

Finally, keep an eye out for Slenderman Expansion support at some point in the next couple/few days: I'm going to finish up the few things I need for that and push them out ASAP.

Ok, so here's the deal: today's earlier release (of the Endeavor Tokens feature) broke a lot of things for a lot of people, so this release tries to fix the major problems that the last release created.

Now, you're probably asking yourself, isn't a pretty bad idea to roll out support for expansion right on the heels of what is ending up being a pretty badly botched release? Yes, it absolutely is, but a guy sent me an email and asked if I could double-time it on the Spidicules support and I'm still fired up from this afternoon's Mario Maker insanity, so I decided to disregard all of that and "do it live!"

Two new features ship with this release and support the expansion:


Otherwise, this one's all break/fix.

...and I'll probably end up doing another break/fix type release tomorrow, as I plan to spend some time QAing all the new stuff that's recently gone into production and trying to work down some of my long-standing presentation issues.

Read more »
Posted by Timothy O'Connell at 9:15 PM No comments:

This tiny release includes a lot of monkey patches, i.e. "hot" fixes or adjustments that were pushed to production as I completed them.

(Turns out mega-release 1.52.1194 broke a bunch of stuff: even more than I originally would have guessed. But you know what they say about making an omelette...)

That said, release 1.52.1219 is not purely brea/fix and it is definitely not without new features. I am  off to a slower start that I would have liked, but in this release I am putting out a pretty big feature from the Campaign Summary refactor milestone.

Release 1.52.1219 includes the new Endeavor Token management feature, so be sure to try it out and let me know how it works (or doesn't work).

One high-level goals of the milestone is to open up the Campaign Summary as more of an active view and to make it part of the multiplayer experience by providing non-admin players views of the timeline, Settlement Storage, etc.


The Endeavor Token feature is the first tiny step in that direction.

Also, I finally bit the bullet, bought a web-license for using Silverado Medium Condensed and the main font of the Manager is now that. [source] There is still some...normalization of the presentation that has to happen for it to look the way I want it to look, but this release is a "first draft" over the over aeasthetic I'm trying to move us towards.

I'm also continuing to chip away at expansion support: look for Spidicules Expansion in the next couple/few days. I'll probably get around to adding support for the Slendarman Expansion, but maybe not for a little while yet.

Release 1.52.1194 focuses heavily on back-end enhancements and optimizing for efficiency and speed (e.g. on page renders).

The plan for Campaign Summary refactor milestone has so far been that I need to pay down a lot of technical debt and address a lot of long-standing issues before I get started on the features in the milestone, so this release mostly refactors the existing code base. In fact, this release contains only one new feature: a minor improvement of the Campaign Summary controls for managing Departing Survivors.

The modal controls for managing Departing Survivors have been clarified and cleaned up and now support an option for returning survivors in defeat: all of those TPK nemesis showdowns can now be recorded automatically.

That said (and I realize that this will be of almost no significance to anyone but me), this release will probably be one of the most significant ones I've done, in terms of general usability.

Not only does it totally redesign the way that requests get handled, parameters get processed and views get rendered, it also instruments a lot of what used to be total spaghetti (and is now, thanks to the extensive refactoring in this release, pretty OK-looking code) and I am already leveraging the new instrumentation in this release to work on improving usability by decreasing response times.

For example, through the elimination of redundant/extraneous code, this release will cut the time it takes to render a Campaign Summary view literally in half:

At any rate, the point of all of this is that I'll be ready to start doing feature work this weekend, I think, once I feel like I've nailed down all of the inevitable bugs/issues that get introduced in a release such as 1.52.1194.

As far as expansion coverage goes, the current plan is to roll out support for the Spidicules Expansion at some point during the feature releases for this milestone, and probably sooner rather than later.

Read more »
Posted by Timothy O'Connell at 1:23 PM No comments: