Bulk Survivor Creation upgrade coming in the next release!

The next release of the Manager will include a major upgrade to the feature that allows settlement admins to create multiple survivors.

In the next release, the feature will change thus:


The next release of the Manager is probably going to happen on Saturday or Sunday morning and it will include this feature upgrade as well as the usual corrections, bug fixes, etc.

Thanks for using the Manager!
Posted by Timothy O'Connell at 1:46 PM No comments:

Release 2.55.1066 is a break/fix type of release that addresses a number of the smaller issues (and a couple of the bigger ones) that have been percolating up this week.

And, speaking of this week, I would like to point out that user feedback/collaboration has been really excellent this week! Thanks again to everybody from /r/kingdomdeath who checked in this week and everyone else who opened tickets and sent emails. You are awesome!

I'm going to be taking a few days off of active support (for the American holiday weekend), but I'll be back early next week, so keep those issue reports coming in!

Read more »
Posted by Timothy O'Connell at 3:37 PM No comments:

(Previously you could do some things using HTTPS, but you would run into errors due to hard-coded HTTP elements, browser rules about mixing HTTP/HTTPS requests, etc. With today's release, you can do everything in full HTTPS.)

I am an EFF supporter (and you should be one too) and I used Certbot to create the certificates for kdm-manager.com and api.thewatcher.io.

The next production release of the Manager will make HTTPS mandatory, i.e. any HTTP requests will be redirected to port 443 of the webserver automatically.

Read more »
Posted by Timothy O'Connell at 1:49 PM No comments:

Release 2.53.1049 devotes a lot of effort to paying down technical debt and optimizing for performance.

Last December, I wrote about working on improving page render times by optimizing the legacy webapp architecture for speed. Later, in January of this year, when I put out the Anniversary Release of the Manager, I set out my three-part plan for improving the Manager in 2017:


To me, the goal of having fewer page reloads/refreshes was the first step towards the larger goal of improving the UX of the site overall.

The second step, as I wrote about in another performance-related post back in January, was to embrace the RAIL philosophy, leverage Google's optimization tools and, ultimately, get views to render in a way that felt more responsive.

And so, for all of those reasons, when I was working on 2.53.1049, I spent a lot of time researching performance optimization techniques for AngularJS apps (and JS in general) and this release chips away at the time penalty incurred during the up-front/page load.

Release 2.53.1049 improves performance on all views, but the "Create New Settlement" view has been totally hot-rodded out and goes really fast now; it literally renders in half the time that it used to and, under optimal network conditions, will always be fully rendered in under a second.

I don't think other views will ever get to this level of performance (mostly on account of how much data they need to retrieve from the API), but I had to start somewhere, and the performance on this view is a major improvement.

At any rate, the optimization work is obviously far from finished, but I think I have made a lot of progress since the Anniversary Release on the performance front.

Release 2.52.1009 is a break/fix release that does not add any new front-end functionality to the Manager.

Given the amount of back-end upheaval going on lately in the ramp up to the upcoming alpha release of The Watcher, it is not especially surprising (to me) that yesterday's release broke as much stuff as it did.

And while it is somewhat embarrassing to have to do these day-after releases, we're moving really fast now on API development, and, given our extremely limited resources, messy releases and daily break/fix work are both kind of just...the cost of doing business, at this point.

At any rate, thanks to everyone who reported issues in the last 24 hours! You guys are the real unsung heroes of this upcoming alpha release.

Read more »
Posted by Timothy O'Connell at 10:52 AM No comments:

Before I get into release notes, I would like to thank everyone who has subscribed to the Manager so far!

It has been about two weeks since I launched the subscription feature, and more than 30 people have subscribed already! In honor of all the subscribers, release 2.52.1001 adds the webapp's first, proper subscribers-only feature: the Campaign Summary storage view.

(I teased the feature in my last post, if non-subscribers want to take a peek.)

There's a bunch of stuff for The Watcher in here as well, since the alpha release of that is right around the corner...

As usual, hit the jump for full release details and thanks for using the Manager!

Read more »
Posted by Timothy O'Connell at 8:27 AM No comments:

One of the main features that advanced users of the Manager commonly write in and ask me to implement is a way to view settlement storage from the Campaign Summary.

Once I added the concept of subscribers and subscriber-only features to the webapp, however, a settlement storage view on the Campaign Summary felt more like something that I could/should do, and so I'm going to roll it out in the next release.

(The next release will be out...before this weekend. Probably not tomorrow, but soon.)

Release 2.50.972 is a break/fix release that cleans up some of the problems introduced in yesterday's JS overhaul.

It introduces some new functionality as well, in the form of Settlement Storage keyword rollups.

We're gearing up for the alpha release of The Watcher, so expect the next release to be mostly focused on that (and not so much on enhancements to the legacy webapp).

Read more »
Posted by Timothy O'Connell at 8:37 AM No comments: 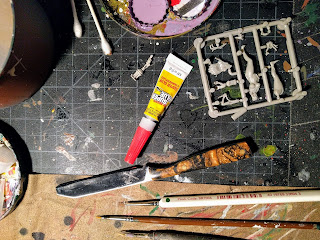 Release 2.50.961 is focused on improving UI/UX by optimizing Javascript performance.

Prior to this release, most of the AngularJS application (i.e. the part that renders the forms) was built-out at random: I just added functionality/features onto it as I went, and never really stopped to think about how that might be affecting performance.

Turns out it was really messing things up.

With release 2.50.961, I wouldn't say that things are perfect, but they are greatly improved over the last few releases. I haven't had the time/opportunity to officially clock it, but page loads seem to be taking less than half as long as they have been taking.

(The Survivor Sheet is still pretty sluggish, so I'm going to the drawing board on how to make that go faster, but all things considered, loads seem way faster.)

Read more »
Posted by Timothy O'Connell at 2:40 PM No comments:

Release 2.50.931 is a tiny break/fix release that deals pretty much exclusively with a major feature bug (hit the jump for complete details).

Beyond addressing that issue, this release also adds a warning to the dashboard for non-subscribers about how their settlements will be automatically removed/purged after six months.

I thought long and hard about this and ultimately ended up putting long-term storage behind the $1 "support wall" because I believe it is fair.

While actual storage cost for old settlements is absolutely trivial (we're talking literal millionths of a dollar per), the effort that goes into keeping older settlements compatible with the Manager, the API and ultimately The Watcher has a non-trivial cost (i.e. that is paid in development and support hours).

As usual, if you have a question/comment, find me on Twitter or use the comments here, etc. 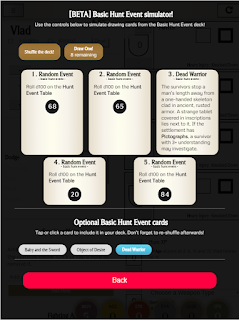 The basic inspiration for the feature is the inconsistencies in the color of the Basic Hunt Event cards (among the promo, core and expansion cards): since the core card backs are one color, the expansion card backs (i.e. for the Lonely Tree) are another and the promo cards a third, it's impossible to randomly draw a BHE card.

The feature, then, simulates the creation of a "deck" including 12 "Random Event" BHE cards and one each of any of the three additional BHE cards and then draw them off one at a time.

(It even rolls the d100 for you...because that took ten seconds to implement and what the hell, you know?)

At any rate, if you're a subscriber and you want to check it out, click the "System" tab and make sure that you've got the "Beta" preference set to "Enabled". From there, click into any of your Settlements/Campaigns, click on the sidenav/burger and click the "β Hunt Phase" button.

And please, if you do end up messing with it, let me know what you think: how could it be better, how would you incorporate it into the existing tools, etc.

Read more »
Posted by Timothy O'Connell at 1:52 PM No comments:

I said yesterday that I wasn't going to put a new release of the Manager into production for a while, but I ended up getting some pretty significant bug/error/usability issues from users on /r/KingdomDeath yesterday.

Mostly by accident (since I'm terrible at this and totally scatterbrained about branches) I ended up working those issues on a feature branch that I started a couple of weeks back and, long story short, I've got a release to put into production today.

Release 2.48.922 mostly implements break/fix and performance optimizations for the Dashboard.

The release also implements a new feature I call 'survivor tags', which are basically little informational items that appear beneath a survivor's vital stats on the Campaign Summary view. For now, they only include Fighting Arts, Disorders and A&Is, though I have some vague plans for expanding the feature in the future (once I know more about Advanced KD:M). 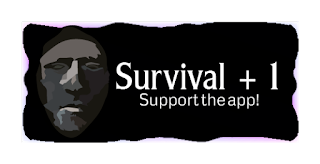 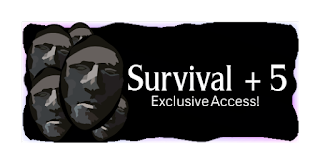 Before I get into the release notes, I would like to thank everyone who has subscribed to the Manager: it has not even been a full 24 hours since the feature went live and...honestly you guys caught me off guard!

When I woke up this morning and checked my inbox, I saw the subscription orders and realized that I'm going to have to step up my plans to implement subscriber-only content.

Therefore, release 2.48.916 delivers a single new feature that paves the way for the introduction of subscriber-only content: API-based preference management on the dashboard.

(Which...in terms of features, is honestly not a huge deal, but is still one more element of the legacy webapp to be migrated to the API and thus should improve overall performance of the Manager, etc.)

As of release 2.48.916, Survival +5 subscribers to the Manager will notice a new preference called 'Beta' under the 'System' tab on the Dashboard.

Enabling this preference is basically an opt-in flag that will cause new/experimental features and functionality to be accessible to you when you use the Manager.

A few things about the Beta opt-in preference:


At any rate, now that all of that new preference management code is in production, I am going to take a little break from daily releases and start working on some of what I've got planned for subscriber-only features!

Read more »
Posted by Timothy O'Connell at 2:53 PM No comments: