The lightning round continues!

Release 2.59.1152 mostly pushes back-end code related to logging, asset attributes and other API miscellany related to the alpha release of  The Watcher.

This release does push some new beta functionality to the legacy app, however. As of 2.59.1152, subscribers with the "beta" preference set to "enabled" can try out "Family" innovation inheritance.

Check out the feature demo on the right to see how it works.

Finally, as far as corrections and fixes go, release 2.59.1152 pushes a handful of corrections/fixes for issues introduced into the legacy webapp due to the speed at which we're moving on back-end development/enhancement.

As I mentioned last time, I'm pushing a ton of low-level API code lately for The Watcher, and that is resulting in downstream (i.e. legacy webapp) bugs.

Thanks for your patience! And thanks again for using the Manager!

I realized a day or two ago that we're into a kind of development "lightning round" right now and that I'm going to be doing small (probably daily) releases of the API as bugs and enhancement requests roll in.

Release 2.59.1140 is exactly that sort of push. It addresses a major bug in the Manager that was introduced one or two releases back, and pushes some new feature code for The Watcher and...that's about it.

All of which is to say that you can expect the next several releases to be similar to this one, with respect to scope and impact.

I expect that we're going to be in this "lighting round" kind of mode until The Watcher starts to stabilize and move into beta, at which point I expect to get back to a less frantic pace with releases.

Read more »
Posted by Timothy O'Connell at 2:20 PM No comments:

First, before I get into the change notes, I want to mention again that The Watcher now has its own subreddit!

If you've got questions, comments, concerns, feedback, etc. re: The Watcher, create a new text post over at /r/thewatcherapp/ and the whole dev team will see it (including Yours Truly).

Second, moving on to the release notes, release 2.59.1137 is kind of boring, with respect to what it does for the Manager: most of the code in today's release facilitates future features/functionality of The Watcher, so there is not much to report on, as far as the Manager is concerned.

The main user-facing element that this release pushes is a beta feature that allows subscribers to manage which expansion/add-on content they own (IRL).

This feature, which we're currently calling user Collection management, does not do anything presently, but will be tied to upcoming features of the Manager and The Watcher.

(I don't want to say too much about those features just yet, however, as they are still very much under development.)

Finally, and it feels like I'm maybe burying the lede here, I should also mention that there is a pretty major correction in this release: Percival is now an expansion.

When she was released, I initially filed her assets under "White Box", but we determined, after a thorough, rigorous, non-partisan inquiry, that she is, in fact, expansion-type content, so now she is officially an expansion in the API and the Manager.


Read more »
Posted by Timothy O'Connell at 2:42 PM No comments:

The Watcher alpha release has begun!

As usual, /r/kingdomdeath has really been coming through with support, signal amplification and assistance. Thanks again!

The first round of alpha testing and tickets brought our attention several non-trivial issues related to how we manage assets behind the scenes in the API. Release 2.59.1125, therefore, is mostly focused on those issues, i.e. on the back-end, e.g. tightening up how game asset definitions are typed/retrieved, correcting some bad math, etc.

This is important to users of the Manager because the high volume of big-deal back-end updates in this release basically guarantees that there will be some unintended downstream consequences, e.g. errors in the legacy webapp at http://kdm-manager.com.

Please report all issues! Every bug you submit against the legacy webapp helps improve The Watcher and, at this point, we need all the help we can get!

(And thanks in advance for your patience as we work through these growing pains!)

Finally, in terms of what's going on in the legacy webapp, this release (finally) implements API support for survivor avatars! In fact, all avatar-related code has been deprecated and removed from the legacy webapp which a.) fixes some outstanding issues that I have been ignoring for...like a year and b.) will improve UI/UX by no longer requiring the Survivor Sheet to refresh/reload when changing an avatar.

A few releases back, some API changes broke the feature that allowed new survivors to be created with an avatar: you could still change them from the Survivor Sheet, but if you tried to create them with an avatar, you got a nasty traceback.

The next release of the Manager (which I expect to put into production at some point this weekend) not only fixes this issue, but moves avatar support to the API, which means that changing survivor avatars will no longer require a reload or refresh of the Survivor Sheet.

Check out the feature demo on the right to see how it will look at tablet resolution.

Individual color schemes are simply HTML style strings (i.e. a series of CSS properties) that are applied to certain display elements in the Manager. If you are a CSS developer and you have an idea for a Survivor Color Scheme, I encourage you contribute your idea to the Manager!

Hit the jump for complete instructions!

Read more »
Posted by Timothy O'Connell at 10:00 AM No comments:

Release 2.58.1104 pushes a bunch of code related to the Alpha Release of The Watcher: in fact, most of what you see in the change log below is directly related to the alpha release, which should be happening...any day now!

This release also includes a the new, subscribers-only feature that lets Survival +5 subscribers color-code their survivors by setting a Survivor Color Scheme from the Campaign Summary view.

Check out the feature demo for that in my last post.

Also, in addition to supporting code for The Watcher and the new color-coding feature, release 2.58.1104 also contains a handful of upgrades/enhancements intended to improve performance.

As I discussed briefly in one of the recent downtime updates, CPU performance is becoming an issue due to the high amounts of traffic we're processing lately (and the large amount of data that goes along with that traffic).

Release 2.58.1104 therefore makes makes a few strategic adjustments to the World daemon, which can be pretty processor-intensive, that should help overall CPU use.

Read more »
Posted by Timothy O'Connell at 9:38 AM No comments:

Starting in the next production release of the Manager, Survival +5 subscribers to the Manager will be able to select color schemes for their survivors.

Survivor Color Schemes modify the color of the survivor's tile on the Campaign Summary view as well as the background for their quick access menu.

All players in a campaign, whether they are subscribers or not, will be able to see these colors, though non-subscribers will not be able to change them.

As future functionality/features are developed, they will include Survivor Color Schemes.

Check out the tablet resolution feature demo on the right to see how it works!

Depending on how long it took the DNS updates to propagate to your preferred DNS lookup server, the Manager and API were down for a little over 10 minutes.

Obviously I'll be keeping an eye on utilization and performance for the next 24 hours or so and, if we need another processor to keep us above water when traffic picks up in the evening, then I'll be adding another one (which will require another downtime).

Thanks for using the Manager!
Posted by Timothy O'Connell at 12:19 PM No comments:

Usage of the Manager is at an all-time high! 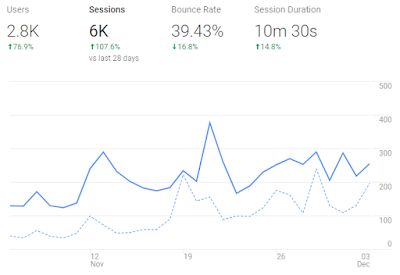 The last 30 days have been the Manager's busiest 30 days ever and, as we get closer to the alpha and beta releases of The Watcher, traffic is only going to increase.

Most of the recent increase of traffic has to do with the 1.5 release and represents new players getting into KD:M for the first time. Just to give you an idea about how many new players are trying out the Manager right now, there are currently 1052 registered users of the application, and 1291 of those registered in the last 30 days!

What's more, I recently learned from the front-end team that we've currently got over 1000 users registered for the beta release of The Watcher.

The bottom line is that performance has already been impacted by this increase in volume and it is time to resize the main production host and add some processor overhead.

Accordingly, there will be a brief downtime this afternoon during which the Manager will be totally unavailable. This should only last for a few minutes, but could go on as long as an hour.

As usual, I will check in here and on Twitter when I am able to issue the official all-clear.

Release 2.57.1091 is primarily a unscheduled tools/admin update to the API.

As usual, you can hit the jump for complete details, but, the executive summary of this release is that I had to call an audible, push back some planned feature work and roll out a non-trivial overhaul/upgrade of the CLI tools I use to administer the Manager.

(In case you are wondering about why I made the decision to postpone planned feature work to focus on administrative tools, the main reason is that administration has been sucking a lot of my time lately.

At the time of this posting, over 100 users have purchased a subscription, more than 1200 new users have registered in the last 30 days (!) and, basically, during the last two weeks, supporting all of that user activity has been a high-touch/manual activity for me and I needed to create some new efficiency.)

But it's not all admin tools in this one. In addition to the usual corrections and fixes, release 2.57.1091 finally gets around to a feature that I've had on the back-burner and only just now pulled the trigger on: survivor status flags in the Campaign Summary view "survivor tags".

Now, when survivors have a disability/status on account of an impairment, you'll see a little flag for it right on the Campaign Summary view.


Check the feature demo here for a quick run-through of how it looks/works.

Read more »
Posted by Timothy O'Connell at 10:35 AM No comments: