PS: the 2.83.1563 release of the manager just bumped us up to commit #667, which means that the Manager spent all summer on the commit Number of the Beast: 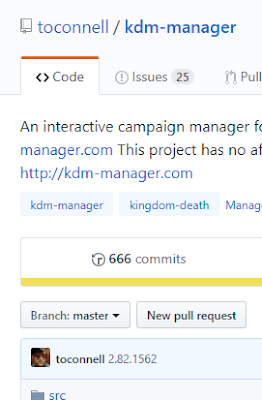 Posted by Timothy O'Connell at 12:29 PM No comments:

Alright, time to shake the rust off and get back to it: Summer break is officially over and release 2.83.1563 has arrived!

The first new release of the Manager in over two months includes support for the new Echoes of Death expansion as well as a number of minor corrections and one or two minor "quality of life" enhancements.

As of release 2.83.1563, settlements can enable the Echoes of Death expansion, which will add the "Strain Milestones" controller to the Settlement Sheet and make Strain Fighting Arts available on the Survivor Sheet.

On the QoL front, the big news is that the back-end process for adding a weapon mastery to a survivor has been revised, clarified and corrected. As a result, the Settlement Event Log will look cleaner and more logical, and the duplicate mastery A&I bug is finally resolved. Big shout-out to @wayforger on that one, for reporting and troubleshooting the issue.

Finally, on the topic of break/fix, release 2.83.1563 commits some more code to the most prolific/persistent issue I've had to resolve in almost three years of supporting the Manager: the dreaded issue #503.

(I will leave the issue open, since it has come back from the dead so many times before, but I think I finally have it beat. Time will tell.)

Read more »
Posted by Timothy O'Connell at 12:20 PM No comments: