This is a final courtesy post to redirect anyone looking for change notes over to the new blog: https://blog.kdm-manager.com

Posted by Timothy O'Connell at 12:27 PM No comments:

This is the last release that will be announced on this blog!
Starting with release 3.117.1972 of the webapp (and 1.19.151 of the API), release information and change logs will be published via https://blog.kdm-manager.com.
(That URL used to forward here, but as of about a week ago, it stopped doing that.)
Thanks for using the Manager!
Posted by Timothy O'Connell at 9:55 AM No comments:

API release 1.16.116 is an API-only release that does not alter any parts of the Manager.

Instead, it upgrades the API and the API's Administration panel with tools that will allow me to document and publish information about releases of the Manager, the API and any future platforms that end up being a part of this project.

Among other things, this new feature of the API will allow me to share information about fixes, enhancements and new features before I release them in order to provide users with more insight into what's coming next.

This is one of the first major changes that I alluded to in the 3.105.188 release and should provide a sense of the direction in which this project is moving.

And, since this new feature of the API will basically work like a blog, API release 1.16.116 also makes this blog redundant.

I might do one or two more posts here on this blog to make sure that anyone who finds their way here is able to figure out where to go for release info, but that's about it.

The next release of the actual Manager will include release notes and a change log that are displayed within the Manager itself.

So, as usual, hit the jump for details on the release.

Read more »
Posted by Timothy O'Connell at 1:12 PM No comments:

As promised, the break/fix release for 3.105.1888 is ready ahead of this weekend and includes most of the major issues that cropped up in the wake of the big deployment on Wednesday.

In terms of fixes, there is actually not much to discuss about 3.106.1893: it provides fixes for a couple of minor API bugs and addresses problems with Survivor Search.

This tiny release actually pushes a feature, as well: dashboard alerts are back. Unlike last time, the UI is a lot cleaner/simpler and Subscribers may choose to disable them.

Hit the jump for full notes!

Read more »
Posted by Timothy O'Connell at 5:26 PM No comments:

API release 1.12.62 went into production without a change log because it was a patch/hotfix release that addressed some critical authentication issues that were preventing some users from using the webapp. The scope of the changes in the 1.12.62 release was limited what was required to address that issue.

If you hit the jump and review the full notes for today's release, you will notice that some lines are prefixed with 1.12.62: that is to disambiguate them from the changes that went live today in API release 1.14.92.

And, speaking of changes going live today, webapp release 3.105.1888 is an absolute beast that pushes a huge collection of fixes, enhancements and new features that I have been working on for almost a year now.

Which, if you read this blog, probably did not expect to see, as you probably remember that new features and enhancements were something that I said I wasn't going to do for this application after October 2019.
Back in October, the theory was that the current version of the Manager was going to go into a kind of "maintenance mode" while I worked on some other projects, one of which was its successor, the Advanced KDM-Manager project.

As of right now, AKDM-M is officially on hold with no plans for future development, though a lot of what I was working on for that project has made its way into today's release, and will be included in subsequent feature releases that will ultimately take the current version of the Manager from three to four.
(To my way of thinking, 3.105.1888 is a transitional release similar to the (also huge) release I did for the API right before I moved the API from major version zero to major version one: I think of it as transitional because it makes it almost, but not quite all of the way to the next major version.)
At any rate, over the next few releases, the Manager's major version number will eventually increase from three to four and I will probably change GitHub repositories as I continue to integrate AKDM-M features into the classic/legacy version of the Manager.

Finally, if you do not plan to hit the jump and review the complete notes (which are extensive), here is a high-level summary of what 3.105.1888 adds, in terms of application features:

As you can probably guess, this release is going to generate a ton of bug reports, so look for the next release to a.) be a break/fix release and b.) to come out very soon: I definitely do not plan on waiting another year for the next one.
Thanks for using the Manager!

Read more »
Posted by Timothy O'Connell at 7:17 AM No comments:

As with the last White Box release, some of the new expansion content required some minor, presentation-level updates to the legacy webapp. As I have mentioned in a the last few posts, I consider these types of minor updates to be "maintenance", and will continue to make them for as long as the legacy webapp is around.

The good news with this content, as, indeed, with all the expansion content that has come out in 2019, is that the updates are mostly trivial or outside of the scope of record-keeping (e.g. they only require minor presentation updates or they have to do with how to build decks, etc.).

At any rate, subscribers of the Manager who enable the new content on their settlements will notice that the recipes for the "Pattern" gear (from the 10th Anniversary Survivors white box) include the "Crafting Process" requirements from the pattern cards associated with the gear.

Beyond that, the 3.87.1666 release includes a couple of minor presentation fixes for gear "cards" (in the Gear Card Lookup) and one typo fix that actually stopped the "White Dragon Gauntlets" from appearing in the Gear Lookup tool (oops!).

Finally, now that all of that is out of the way, I would like to mention that I (finally) launched the official hobby blog for The Labor in Vain: please check it out at https://blog.thelaborinvain.com and let me know what you think! 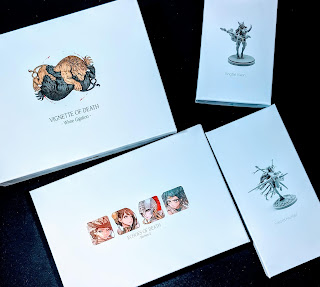 Read more »
Posted by Timothy O'Connell at 10:06 AM No comments: